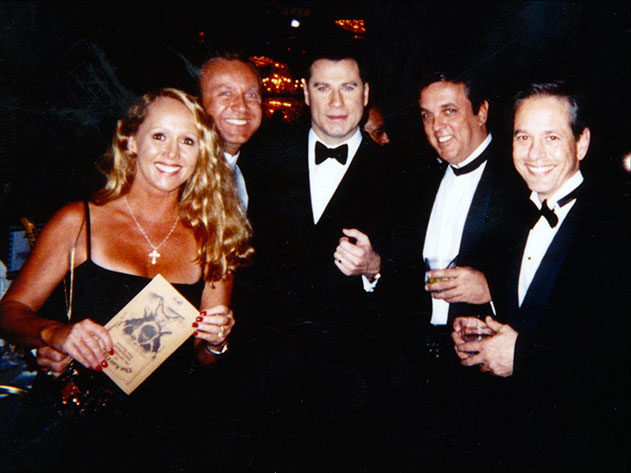 So, what do you do when a friend of a friend comes to town?

When that friend is John Travolta, you round up your nearest and dearest and pile into the back of a Rolls Royce limo to welcome and support him. Even better when the Urban Cowboy is flying himself to Chicago to receive a Lifetime Achievement Award at the Chicago International Film Festival. That’s exactly what hair stylist Jeffrey Meyer, real estate developer William Senne, and I did to welcome – not Mr. Kotter – but our very own Vinnie Barbarino to North America’s oldest competitive international film festival which takes place in Chicago every October. “Miss Hollywood” the glamorous art entrepreneur Karen Murphy and her actor husband, Bobby Cooper (to the right of Travolta), joined us in the fun. Bobby and John had been in She’s So Lovely with Sean Penn and Robin Wright. On the far right, Bob Berman, a client of JRWD, also had a personal connection to Travolta. His aunt used to babysit for him when he and his family lived here in Chicago. The highlight of our evening was a totally unscripted moment when Cooper hijacked Bill Senne’s cell phone, called Sean Penn (he’s been in several movies with Penn) and ran up to the podium while an astonished John Travolta was accepting his award.  Making his way through several body guards, Bobby gave John the phone so Sean could congratulate him. Not wanting the fun to end, Bill Senne hosted the “After Party’’ at his Bucktown home after a quick stop at White Castle for a well past midnight snack. We partied ‘till the early morning.