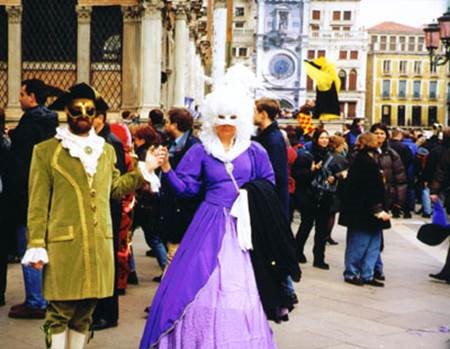 I truly believe that Venice (Venezia) is one of the most amazing cities of the world. When I think of the skills and technology that was needed to build the 117 small islands separated by canals and linked by bridges I am always in such awe. It is located in the marshy Venetian Lagoon which stretches along the shoreline, between the mouths of the Po and Piave Rivers. Venice is renowned for the beauty of its setting, its architecture, and its artworks. The city and the lagoon are listed as a World Heritage Site. If you have never been you must add it to the top of your bucket list. Recently a bunch of my cohorts joined me on a junket to Venice. We were guests at one of the world’s most exclusive parties –  the fabled Il Ballo del Doge. Staged during the annual Carnivale of Venice, it is a spirited reconstruction of an 18th century masked ball attended by some 400 guests decked out in period costume. I received an invite when I purchased a magnificent begolded and bejeweled costume last summer in a little shop in the Mercerie while I was in Italy for a class about Palladian architecture.  The venue? The circa 1500 AD Palazzo Pisani Moretta. Carnivale is a notorious celebration of the approach of spring. Costumed residents, guests from around the globe, and street performers fill the thoroughfares and bridges during the festivities. My Mom, in a beautiful 18th century gown that coincidentally just happened to be made out of the same fabric as her hotel suite draperies, contemplates how the hoop skirt will make it through the door… the bathroom door! Chicago’s First Lady of Sports, Thelma Krause, will make a grand entrance to the ball. Did she select that gown because it was the color of Bull’s uniform? We were definitely dressed to the nines and ready to party! Bill Senne (seated) joins me (left) along with Bill Butler, and Laguna Beach, CA general contractor Michael Rae. Anticipation peaked as we boarded the taxi acquei that transported us to the ball. I always tell people that I like my unreal world so much better than my real one. We were so psyched upon arrival at the Palazzo… Part of the unexpected welcoming committee… A costumed night in Venice! There is nothing like it; so much more adult than Mardi Gras in New Orleans. The city, costumes, architecture and art. Try it and let me know what you think.