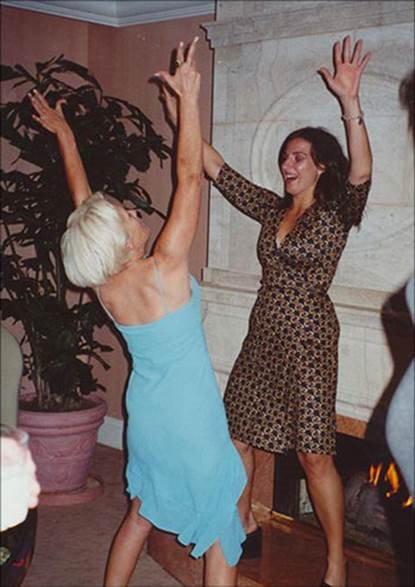 What would Martha say about my reputation for hosting parties for no good reason at all? It is all about being spontaneous! Who needs a reason to have fun and be irreverent anyway?

“Thank God Columbus Discovered America’’ worked well for me recently while entertaining West Coast friends at my home away from home – the Beverly Hills Hotel. Nina, Pinta and Santa Maria-shaped appetizers were gobbled up by more than 100 guests comfortably seated on the mammoth wrap-around terrace of my room at the hotel’s west end.  This suite had its own entrance directly off of the front of the hotel so my guests did not have to go through the lobby. Georgia Davos and personal trainer to the stars, Chris Vargo, were among the first to show up.  They both look like they are in great shape, don’t you think? Elaine Young eagerly joined my tribute to Chris Columbus discovery. Glamorous and ebullient, Young lives a life that rivals those of her star clients, who include Elvis Presley, Elizabeth Taylor, Warren Beatty, Burt Reynolds, Frank Sinatra, Barbra Streisand and Stevie Wonder, among others. Of her six husbands, one of them was actor Gig Young, who is the father of her daughter. The license plate on her Rolls Royce convertible is “Elaine”.

Fashionista Jennifer Nicholson (yes, daughter of Jack) and her husband, Mark, exchanged quips with actor Bobby Cooper and me, along with Jen’s “alleged” sister, Honey. Tricked out as Cher, Cissy swears Sonny sang to her from the dead – “I hit the tree, babe!” The big high five – exactly what Columbus did when he spotted land. Cheryl Hoban, her husband, John (far right) and I are out on the terrace with Jim Manos (Emmy Award winning writer for The Sopranos, Executive  Producer of The Shield, and creator of my favorite TV show Dexter). If you need some party ideas and/or help planning a special event, let us know. We will create something extraordinary for you.

To good health, much love, and peace.