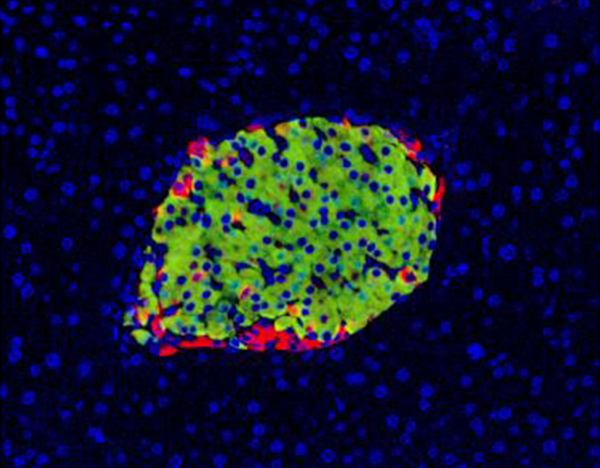 This is a remarkable story…

It’s been two years since Sandy Alvord has needed prescription insulin to control her blood sugar levels. More than three years have elapsed since Suzi Johnson threw away her insulin pump and started living her life as a cured diabetic.

Both women participated in the Chicago Diabetes Project (CDP), a global research study whose goal is providing a “functional cure” for diabetes, a debilitating disease which is the world’s leading cause of death. Pancreatic islet cell transplants, received at the University of Illinois at Chicago (UIC), enabled these women to stop taking prescription insulin. The procedure was done under the supervision of Jose Oberholzer, M.D., CDP’s director. He is a professor of surgery, endocrinology, diabetes and bioengineering at UIC and directs a panel of 13 scientists from three continents participating in the program.

Transplant patients Alvord and Johnson told their stories at a recent benefit dinner for the Chicago Diabetes Project at Accanto, a restaurant in Chicago’s Logan Square neighborhood known for its World class Italian cuisine. The menu for the remarkable seven course gourmet repast was designed by internationally-acclaimed Michelin star-rated Chef Domenico Acampora, himself a diabetic. The event was underwritten totally by Accanto’s owners Maria and Giovanna Rubino.

Raising awareness of the perils of diabetes and the importance of developing an effective cure for this disease, which is likely to affect more than 300 million people across the globe by 2025 was my reason for organizing this event. Dr. Oberholzer updated guests on progress of CPD’s work and answered their questions.

“The mission of CDP is to make islet cell transplantation today’s most promising treatment for diabetes and a viable option for all who suffer the disease,” Oberholzer told the group. “We are now able to provide a functional cure‚ on a limited basis; however, we hope to be able to generate an unlimited supply of insulin-producing islet cells to make this treatment available to all who have been afflicted with diabetes.”

Transplanted cells stimulate insulin production and regulate glucose levels. In 53-year-old Suzy Johnson’s case, the cells began producing insulin the evening of the day of her transplant. Within three weeks she was able to disconnect her insulin pump and begin living the life she was forced to abandon more than 20 years earlier. She was diagnosed at 30, an advanced age for the onset of type 1 diabetes.

It took Sandy Alvord, whose diabetes was diagnosed when she was 6, a little longer to kick the insulin habit. Her first two cell implants failed but the third worked like a charm.

While both patients currently take immunosuppressants, current research is being done on an encapsulation process that may make anti-rejection drugs unnecessary.

While CPD is within arm’s length of achieving its goal, the remaining research needs to be advanced at a quicker pace – something that takes money. While the study receives some government and other public funding, private donations are always welcome.